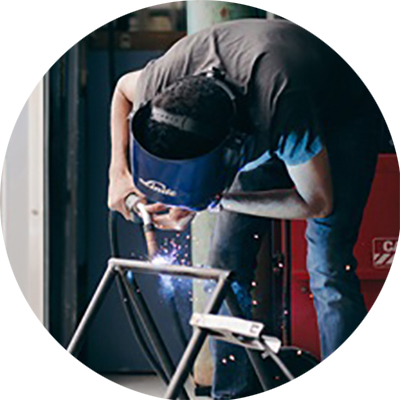 This paper concerns with the implementation of the compressible flow solution methodology for solving 2D shallow water flow problems. It is well known that in both cases, the continuity and momentum conservation equations look quite similar, but depth replaces density of compressible flow, and the Froude number will replace the Maeh number. Thus, any mass imbalance produces a change in depth equivalent to the density change for compressible flow. It is possible to combine momentum and continuity equations to obtain a predictor-corrector algorithm for establishing the depth field. However, as the Froude number increases, the governing equations change their character from elliptic to hyperbolic, with a parabolic transition at a Froude number of unity and this change is not reflected in the equivalent classical pressure-correction equation, which keeps its elliptic character. The extension of incompressible (SIMPLE-based methods) to compressible flows, incorporates a convection-like term (wave velocity related) to the pressure-correction equation. The drawback of the extension of the pressure- correction to compressible flows was the poor shock-capturing capability, which is due mainly to the treatment of the convective terms in the conservation equations. In this work, a high order bounded treatment of the convective terms along with the depth-correction for all Froude numbers is implemented. A numerical solution is presented for all Froude numbers, and it is compared with benchmark problems.